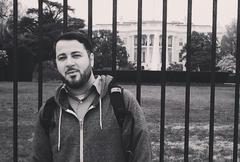 Kevin Delgado is a multi-media artist and cartoonist based out of Buffalo, New York. He began to work as a professional graphic designer following his graduation from the Art Institute of Pittsburgh. His handiwork can be seen all over Western New York.
Kevin’s notoriety really took off in 2017 when he formed Solstice Art Publishing and released “Volantis”, an ongoing comic book series. As of fall 2020 there have been eight issues and a 160 page trade paperback printed. All have nearly sold out their print runs. Delgado worked on the series as it’s creator, penciler, inker, colorist, editor and co-writer.
The fun doesn’t stop there. Kevin has also been commissioned to produce art for a wide assortment of clients ranging from Google and Blue Cross Blue Shield to some of Hip Hops elite emcees. This has led him to become a highly sought after album cover artist.
In November 2020 Kevin along with Brooklyn, NY based musician Deuce Ellis, will debut a mini comic titled “Midnight Ouroboros” as a tie-in for his new album of the same name.
Kevin is currently working on a lengthy project for D’Youville University, rebranding many of the colleges aspects in a graphic novel format. After that he plans on releasing the ninth issue of Volantis and launching a crowd funding campaign for his standalone story “Tuff Stuff”, which he has lauded as “Robert Crumb meets Robert Liefeld”.
If that’s not enough, you can catch him at many comic book conventions (when they reopen) and on his Youtube interview series “Shop Talk”, where he explores the many facets of comic books with its creators. Care to learn more, please check out www.volantiscomics.bigcartel.com
​